Just as the Bauhaus did at the beginning of the last century, the Distributed Design Platform values ​​multidisciplinarity in order to successfully address the challenges of each era. In light of the New European Bauhaus, called Distributed Design, this novel approach to design aims to demonstrate the potential of global networks of creators and spark a conversation around the role distributed practices play in key issues that concern the New European Bauhaus, including social inclusion, the new aesthetics and sustainability.

The Distributed Design Platform community opens the way to new aesthetics and functions.

Although the “aesthetic” concept can sometimes promote a biassed perception of design, the Maker production positions itself in instigating how to go beyond this “Achilles heel” using digital manufacturing. For instance, Vivi House, an innovative building system for the construction of multi-storey mixed-use houses – is an “in house” example of how creative talents working with the Distributed Design concept are responding to the New European Bauhaus aims. Finally, enriching and making new ways of living possible. The Vivi House project, highlighted by the commission on their New European Bauhaus website, was developed by a team of emerging creatives (picture above) part of the Distributed Design Platform community, who won the Distributed Design Awards in 2019.

Among the many cross-industry partners from around the world, Fab Labs and makerspaces represent how the Maker Movement has given rise to new accessible ways of designing, manufacturing and producing in Europe and the world. Enabled by digital manufacturing and global communication infrastructure, Makers are changing the paradigm of design and production. With such a shift, in which ‘bits’ travel globally while ‘atoms’ stay local. Thus, a design reality emerges that gives preference to open, collaborative, sustainable and ecosystemic practices. Such mentality contributes to the New European Bauhaus aims by taking actions like:

→ Translating the European Green Deal into tangible changes on the ground that improve our daily lives through innovation, creativity, culture;

→ Encouraging citizen participation projects that are built on community foundations;

→ Creating a new lifestyle that unites sustainability with quality design, with the focus on the new aesthetic.

By curating a series of inspirational encounters such as talks and workshops, the Distributed Design Platform highlights how to implement these ideas on social inclusion, new aesthetics, sustainability in practice. The first Distributed Design Platform New European Bauhaus talk exemplifies these opportunities, which were summarised in bullet points.

Makerspaces for a greener Europe: The role of the maker community in the New European Bauhaus. 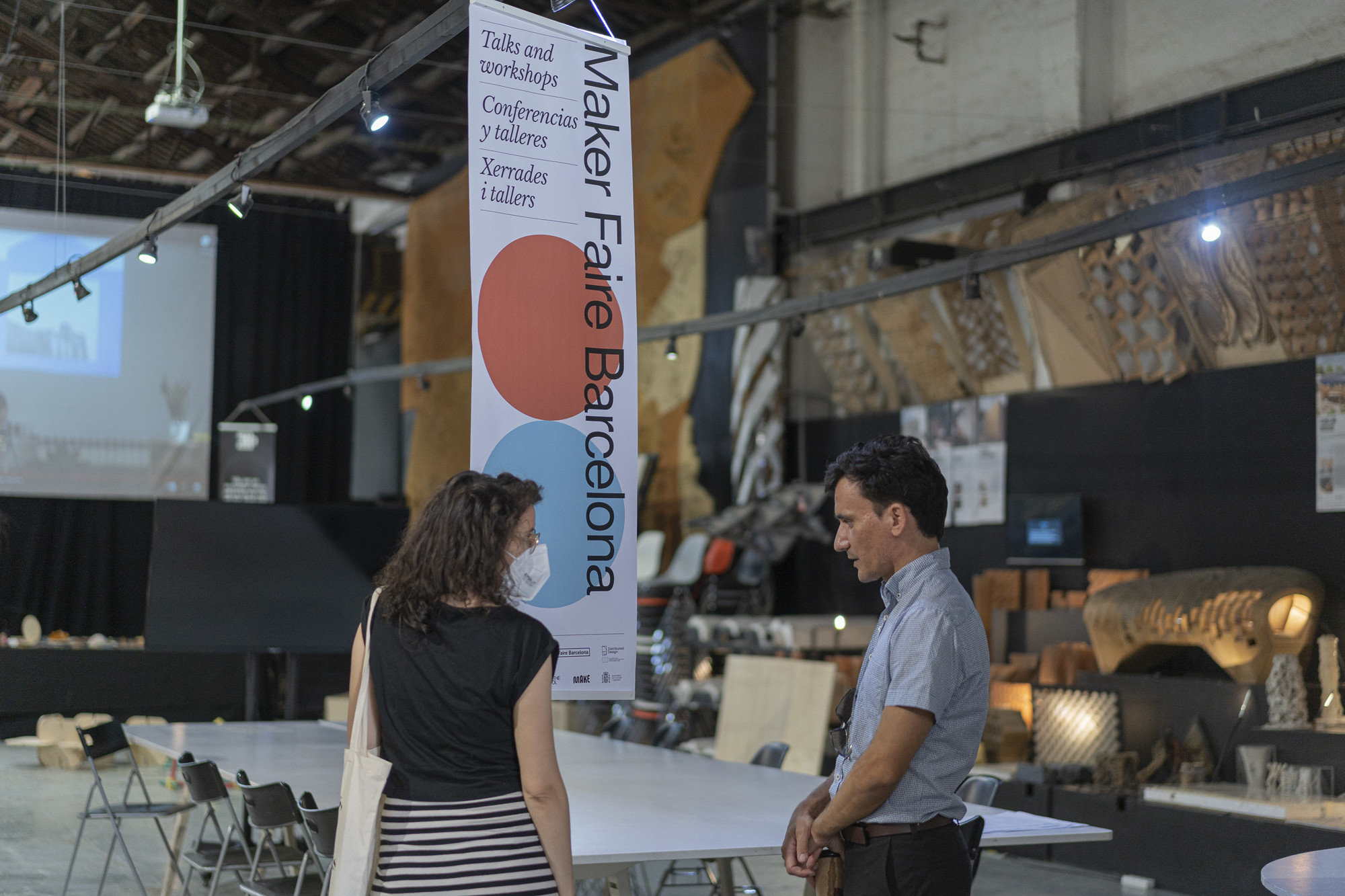 Talk #1 Makerspaces for a greener Europe:

The role of the maker community in the New European Bauhaus.

The first Distributed Design Platform New European Bauhaus encounter was hosted by Fab Lab Barcelona on the 1st of July, 2022 during the Maker Faire Barcelona. The event brought together cultural makerspaces from different Spanish regions which, in turn, and like Distributed Design Platform, are partners of the New European Bauhaus. The selected speakers showcased their own ways to social inclusion, new aesthetics and sustainable functions. The event was powered by the Ministry of Culture of Spain, alongside the Creative Europe Programme.

In the first instalment, the Distributed Design Platform New European Bauhaus encounter explored how cultural makerspaces and creative centres are contributing to a greener Europe, and focused on the topic of circular and open design for social inclusion. The knowledge and skills exchange was moderated by Paula Sanchez, from Fab Lab Barcelona at The Institute of Advanced Architecture of Catalonia (IAAC).

Discover ways in which cultural maker spaces in Spain are successfully contributing to a greener and inclusive Europe by reading the Talk #1 main takeaway.

1. Reviving obsolete spaces and buildings, with LABoral in Asturias.

The redefinition of public spaces must be part of long-term strategies where prototyping and experimentation are fundamental axes, and where the citizen takes a leading role. The principles of circularity appear in the description of the New European Bauhaus initiative, highlighting, among others, the need to revive obsolete spaces and buildings. The old Universidad Laboral, built in the 1950s, has housed an art centre since 2007. And, now the industrial building also hosts multiple actors, as Fab Labs and technological innovation centres.

The Art and Industrial Creation Centre, LABoral, is an exhibition centre in Gijón, Spain, for art, science, technology and advanced visual industries. Their programme of activities mirrors the changes society is undergoing and its immersion in contemporary visual culture. The space is a multidisciplinary institution that produces, disseminates and promotes access to new cultural forms, and houses the Fab Lab Asturias.

→ New aesthetics: They hold the capacity to act as a platform to showcase diverse expressions (of art, science, culture and design), seeking to generate associations between the architecture of the place, linked with leisure and rest. Their awarded project “Vacacional” by Olmo Cuña, for instance, brings thought provoking questions like: “Can we actively relate to the symbols of the past, without turning them into ruins or relics? What chance do we have of inhabiting a place in a state of intentional abandonment? Apart from looking nostalgically at the buildings from the outside, what changes in perception can it mean to enter them?”

→ Sustainability: Their “Creando Bosques” (Creating Forests) project by Carmen Cantón, works as a guiding metaphor for the dialogue between nature and human art. The initiative has become a participatory nature practice that represents both a monument and a society. Like, “planting trees” as a new performative action. Subsequently, in involving art with nature, the LABoral community creates a link between the environment and the buildings, and inspires the emergence of the LABoral’s EcoLab.

→ Inclusion: Their networking and associationism mentality works as means for establishing guidelines for dialogue. Through collaborations, exhibitions and residency, artistics approaches and dialogues about the human relationship with nature and place, they actively promote and, thus, amplify local actors’ impact. Jointly, as a hub, like-minded actors turn into a growing relational knot, from a perspective of networking, dissemination and social impact.

Facilitation as a skill is important to supporting teams in the creative process during innovation. Innovation labs hold the potential to enhance innovation in experience-based sectors. The enhancement of the urban environment design involves solving complex challenges, such as those that arise when you embark on the path of sustainability. Collaborative practices, to solve those complex challenges, require a wide variety of skills and experience to bring people into play and perform as a multidisciplinary team.

La Pinada Lab in Valencia is an Open Innovation Laboratory for facilitating sustainable innovation processes and encouraging collaborative work towards this aim. It does so by connecting areas of knowledge, combining the overall vision and activity focused and results-oriented. As the New European Bauhaus, is inspired by being inclusive, encouraging a dialogue across cultures, disciplines, genders and ages.

→ New aesthetics: They are set in nature, using attractive architecture in dialogue with it’s immediate environment. The La Pinada Lab contributes to designing future ways of living by rethinking cities on topics such as urban design, Campus’ energy, water and waste management, governance, circular economy, and awareness about neighbourhood environment.

→ Sustainability: They perform construction with sustainable, reused and recycled materials, with its own energy production. La Pinada school (picture above) is one of the most sustainable buildings in Spain. Their building counts with air filtering systems, reducing the concentration of CO2 and VOCs, optimised natural lighting materials with a low footprint, such as wood and baked clay; green roof and photovoltaic, and rainwater recovery.

→ Inclusion: it is an open space for collaboration, a social meeting place. For instance, facilitating co-creation workshops with Communities of Practice.

3. Going beyond a human-centred perspective to a life-centred and spatial perspective, with TransfoLAB in Catalonia.

There are multiple means to draw inspiration and learn from nature. And one way is through recycling and the use of waste. The capacity to develop communities and physical spaces around recycling, upcycling or the transformation of waste or surplus food help improve the day-to-day life of consumers, citizens, entrepreneurs and beyond.

The Centre for Trash Investigation, TransfoLAB, is focused on design, innovation, production, and experimentation with waste, the circular economy, and environmental sustainability. TransfoLAB is located in Poblenou, Barcelona. An area known for its industrial heritage. But also known for facing challenges through gentrification. TransfoLAB is one of many organisations which are proposing creative and manufacturing activities for an alternative way of urban development. Answering as the New European Bauhaus, inspired by responding to needs beyond functionality, being sustainable, in harmony with nature, the environment, and our planet.

→ New aesthetics: By showcasing the potentiality of materials they actively contribute to breaking the stigma of what people generally consider waste. People are encouraged to explore in their making processes new material aesthetics. Valorizing the stories that materials tell us through their ageing process and being part of human life. At the entrance of their building, their showroom showcases a fraction of the endless possibilities of what can be done with a not functioning fridge, bicycle rims and other precious items. Passersby can see what the Makers at the TransfoLAB coworking space have created out of the “treasures” they found in Barcelona’s streets.

→ Sustainability: With their innovative means of working TransfoLAB is drawing inspiration and learnings from nature to boost creativity, is experimenting with unusual materials, and learning new techniques to create works of visual art and design. Materials are given a second life at TransfoLAB, contributing to the zero-waste philosophy.

→ Inclusion: They converted their site into a space that focuses on capacity building where citizens experiment, develop and materialise their ideas and engage with (waste) material investigation and transformation. They share their knowledge in educational programmes in their “Transfoacademy” in collaboration with schools. Their actions are raising awareness about the spatial dimension contributing to ecosystem development in their immediate surroundings.

The Distributed Design Platform, the highest representative of this new approach to design,  is joining a curatorial discussion with the intent to investigate the New European Bauhaus in a series of activities as talks and workshops to showcase how cultural makerspaces are successfully contributing to take action towards these aims.