Syntropia is a shoe project made with bio-based materials which can grow on one polycultural field.

New bio-based materials are often derived from industrial agricultural leftovers. The monocultural, intensive, extractive farming practices used to produce these resources have major environmental impacts. Syntropia proposes a shoe made with bio-based materials which can grow on one polycultural field, in Spain. Syntropia creates a dialogue between the design and implementation of the polyculture and the design and production of the shoe. The ecosystemic necessities of the multicrop culture determine the design of the shoe and vice versa. The shoes are designed so all the parts can be produced locally, as well as globally. The complexity of production is simplified, not only through the modified construction, which permit repairs, but also through the use of low threshold tools and the development of a modular last system. New materials have been developed and traditional one have been rediscovered. Continuous fibre 3d printing is used alongside hand weaving, casting and stitching.

(The project as been develop thank to Re-FREAM European fundings, part of STARTS Programme)

Syntropia envisions environmentally sustainable local production. Part of the project focused on researching traditional crafts and the associated local resources, with the objective of preserving and revitalising existing knowhow and cultural heritage.

Syntropia creates a dialogue between the design and implementation of a polyculture and the design and production of the shoe. The ecosystemic necessities of the multicrop culture determine the design of the shoe and vice versa. Our starting point is to develop a shoe based on biomaterials which can grow on the same polycultural field. Thereby taking control of the impact that the materials we are using have on the environment during all steps of their lifecycle. This means the shoe is made solely from renewable resources and these resources are grown in a regenerative polyculture, which allows for enrichment of the soil, limits the use of water and fosters biodiversity. We are proposing to design a sustainable resource management as well as challenging existing strategies for material management and footwear production. In order to reach a first draft for this polyculture we started a collaboration with Spanish agronomist Fernando Bautista Expósito. After defining the general characteristics necessary for the shoe, we generated an initial list of species and materials commonly available on the market. This allowed us to create a first archive of physical samples to study and experiment with.
Starting from the initial list of plants that we created, Fernando Bautista Expòsito narrowed down the geographical position of the project even further and led us to the region of Andalucia, in the South of Spain, another area with a long tradition in footwear manufacturing.
He evaluated the already present species in terms of their climatic needs and their presence in the agricultural landscape of the Iberian Peninsula. He then added relevant species with similar or complementary characteristics already growing in Andalucia. He also expanded the range of information from material production to include the ideal climatic conditions and other relevant information connected to the potential or problematic growth of these species.
Since the initial iteration, the list has become an archive of a variety of different aspects, allowing us to further investigate production processes and material use.
Most of the species we looked into played an important role in the world of manufacturing and agriculture prior to the Industrial and the Green Revolution.
Due to hands-on experimentation, and a constant focus on the evaluation of material qualities and agronomical consideration, the list became gradually more refined. Ultimately, producing a list of 16 potential species which could be farmed together in Andalusia, in a polycultural setting and could be used as raw materials for the production of our shoe.
Furthermore a traditional shoe can have up to 40 different components, made with a variety of different materials, assembled irreversibly through glue and stitching, limiting possibilities for repair and disposal. Through the development of a simplified construction, components are essentially reduced to four (upper, frame, lining, outsole). The parts are worked without gluing, which means they can be separated, disposed off and repaired, when necessary. Furthermore, the shoes are conceptualized so all the parts can be produced locally, as well as globally. The complexity of production is simplified, not only through the modified construction but also through the use of low threshold tools and the development of a modular last system which further simplifies and minimizes the resources needed.

The shoe can be seen as a flexible framework, where each component can be produced with different levels of technological complexity according to the infrastructure locally available. The upper can be hand crafted as much as industrially manufactured. The outsole can be 3d printed on demand, cut from standardised rubber sheets or produced in higher numbers by mold casting. This approach proposes a system which uses appropriate technologies in relation to the potential local context of production. This flexibility can be found also in the materials used to manufacture the shoes. Working with materials derived from a biodiverse agro ecological system challenges us to implement the same richness in biodiversity of materials in the design of the shoe. Following seasonality through the years, we aim not to rely on one resource alone. We designed a product where each component can be manufactured using a variety of different resources respecting the unpredictability of natural cycles.

The process of research and development of Syntropia, taking into consideration environmental multispecies needs as well as technical manufacturing requirements into consideration has been very new to us and to Fernando.
We are convinced that the concept and approach we were developing is relevant not only within the specific context of sustainable footwear manufacturing in the Mediterranean context, but globally. This is why sharing the documentation as well as sharing the process is just as important as the “final” results themselves. Therefore we produced a publication where we share all the research and experimentation process, which we make available for free for whoever is interested in it.
Furthermore the use of FDM 3d printing combined with the simplified construction allows us to envision small scale on demand production in a distributed matter, using commonly available non proprietary technologies.

During the project we put a lot of effort and resources on creating visual tools that would allow us to explain the complexity of the project and promote regenerative design practices in a clear and attractive way. We collaborated with illustrator Anastaija Mass and photographer Elisabeth Handl to narrate the intertwined relationship between the designed polyculture, the individual species, the materials and the shoes.
The four prototypes represent the quest of allowing flexibility in the materials used and in the production systems employed. Each model represent a level of technological complexity in the production of the materials used, telling, through aesthetic choices the story of technologies and materials. 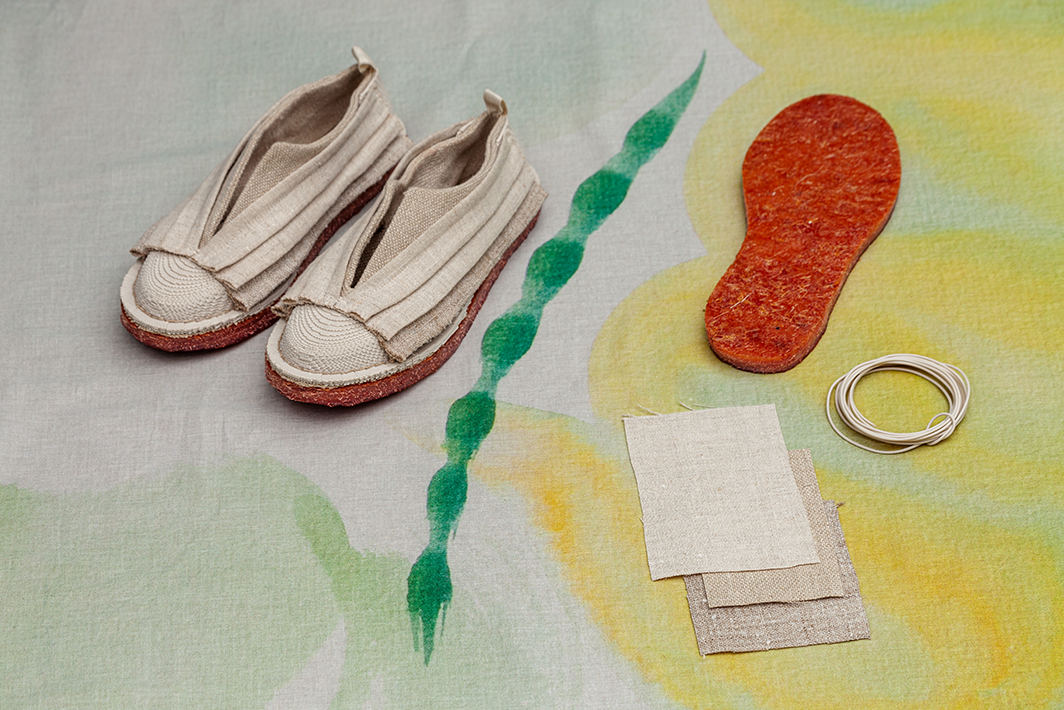 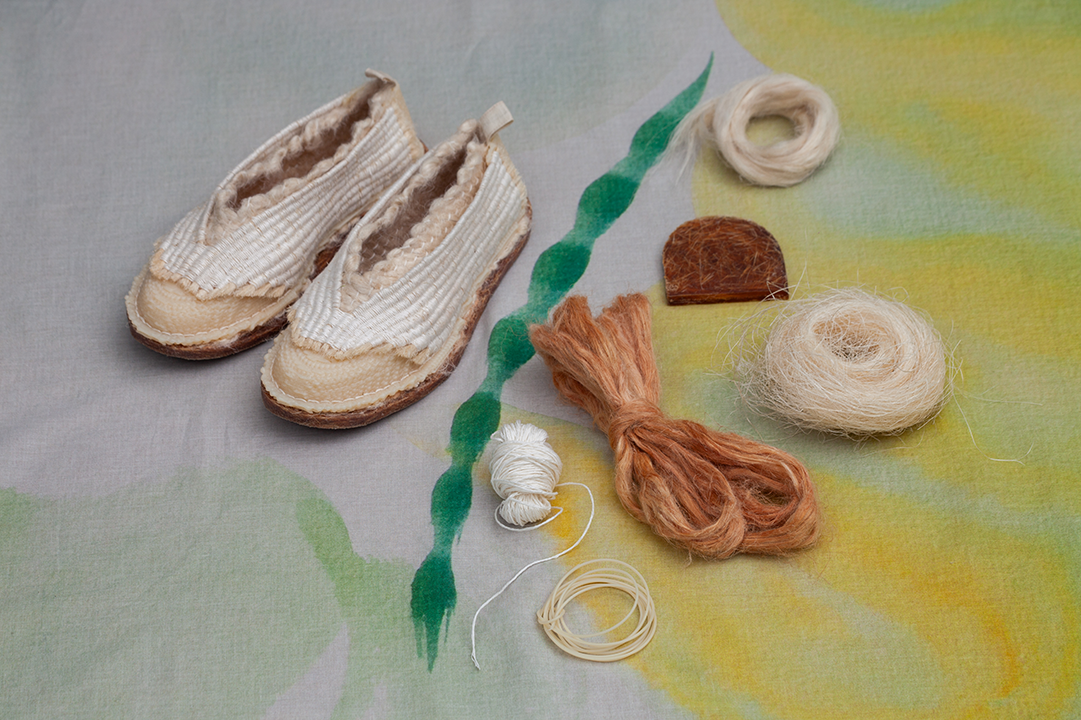